6.-29 November, 2018
GAVU, Gallery of the Academy of Fine Arts in Prague
Text by Magdalena J Hartelova

Second in the Accessibility Note exhibition series presents Cassie Thornton, an American artist currently living in Canada. Thornton’s socially engaged art practice is grounded in transfeminism and focuses on the influence of capitalism on our collective and individual imagination. In her project for GAVU, the artist builds on several of her previous works, such as portals-walls of imagination or hired breakdowns venting social pressures, to pointedly ask the viewer: “How much time can you afford to put into an illusion?”

As always, Thornton is confronting the audience head on, challenging us to face the oppressive systems at work in our everyday lives. As always, she does so with humor, sharply yet caringly, without attempting to flatten reality into a black and white narrative but including messiness and ambiguity. For her exhibition at the Academy, Cassie Thornton transports the gallery into a moment of an eclipse. While the lack of sunlight may seem to deform shapes of objects at first, eclipse is actually a time of revelations. It reveals the limits of what we held as reality and thought possible to be arbitrary, unimaginative, plainly false. 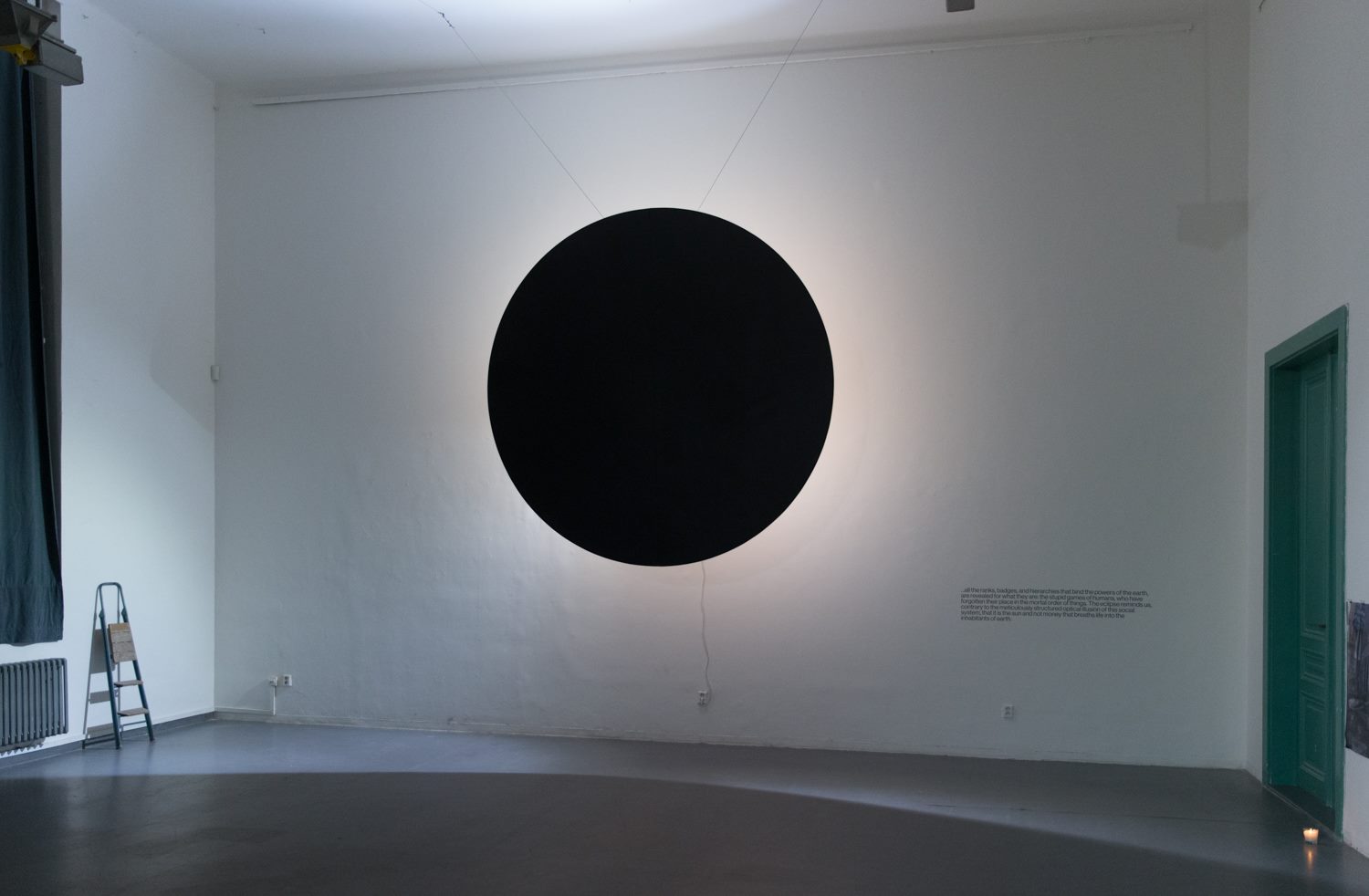 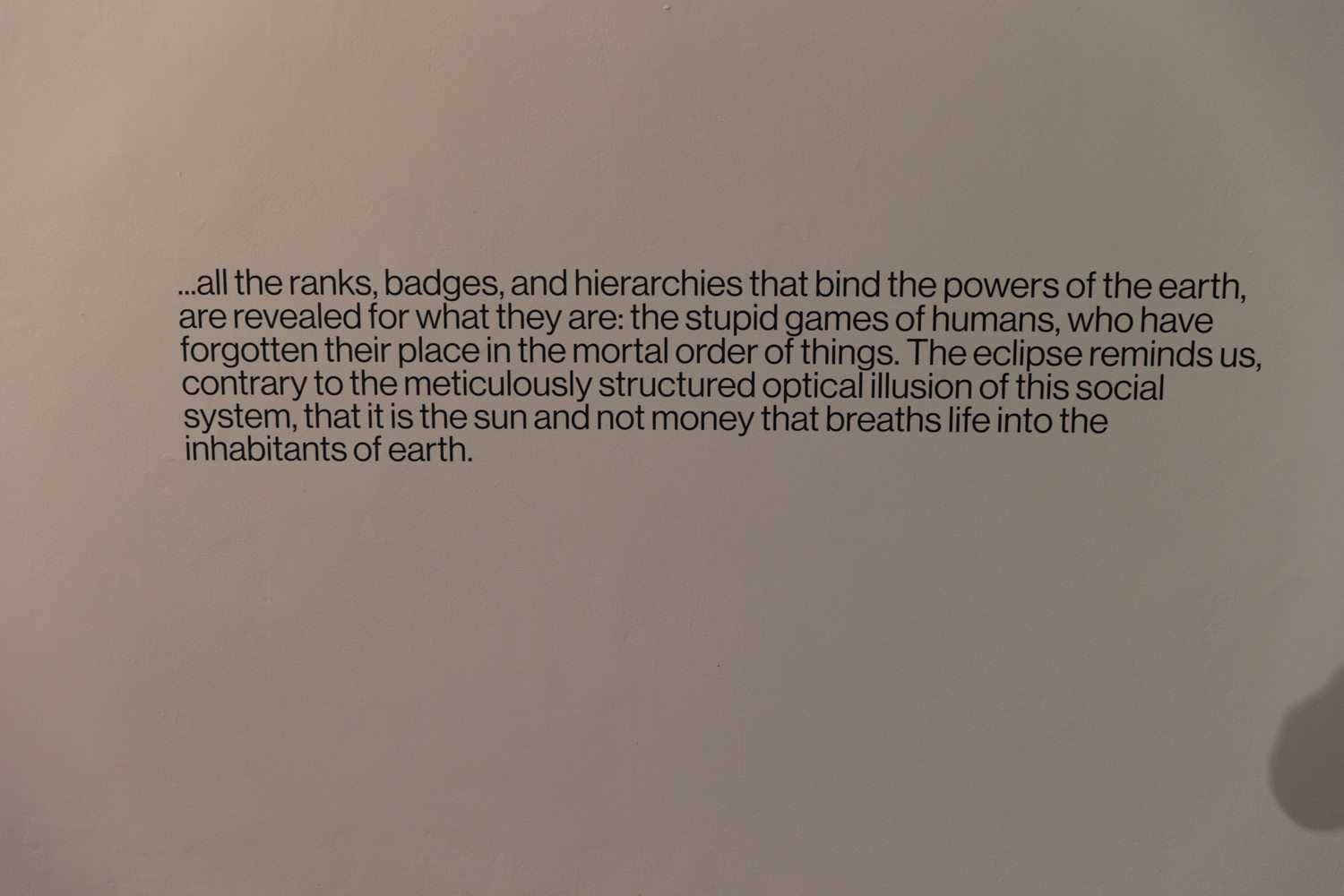 The gallery is dominated by a black circle suspended above the space. The circle is an escape portal for those who want to co-create a society organized around different values than monetary productivity, patriarchy, and pathological individualism. The shelf on opposite wall displays contracts for performance that have taken place during the last week. Three actors, merged here into one character, visited various places of patriarchal power in the city. They asked for women and mourned their absence, breaking down with sadness caused by fear of being left behind. Now and then, we can hear them in the space. The men worry women have simply left, that they have joined the queer people, the people of color, the disabled and poor people to create a world of their own, to outgrow the oppression of current society.

The black circle is also a Black Hole that sucks out everything that comes to its vicinity. A photograph forms a line sneaking around half of the gallery. It shows people waiting in front of the National Bank for the centennial coin. Lit by candles, the piece is given a light of unreality. If the line is currently a monument to capitalism, maybe the candles mourn its victims. The eclipse uncovers both: the wounds we try to hide caused by our current economic system together with the remnants of social trauma of so called “communism”, where socialist benefits, such as free health care and education, as well as right for employment and housing, were entangled with loss of freedom stolen by the totalitarian regime.

The black circle is also, very obviously, a table top from the previous exhibition, painted black and lit from the back. It is an illusion. There are two different illusions put forth by Thornton in the exhibition. One is, in Thornton’s words, ‘’the illusion of capitalism as savior, money as wealth, people as competitive, hierarchy as natural, collectivity as a threat.” The other illusion is the portal. A text on the floor asks us to squint our eyes and use our imagination to transform the circle, to see an entrance where we know there is a wall. At the end of the day, all we have is time and the decision as to where we invest it. 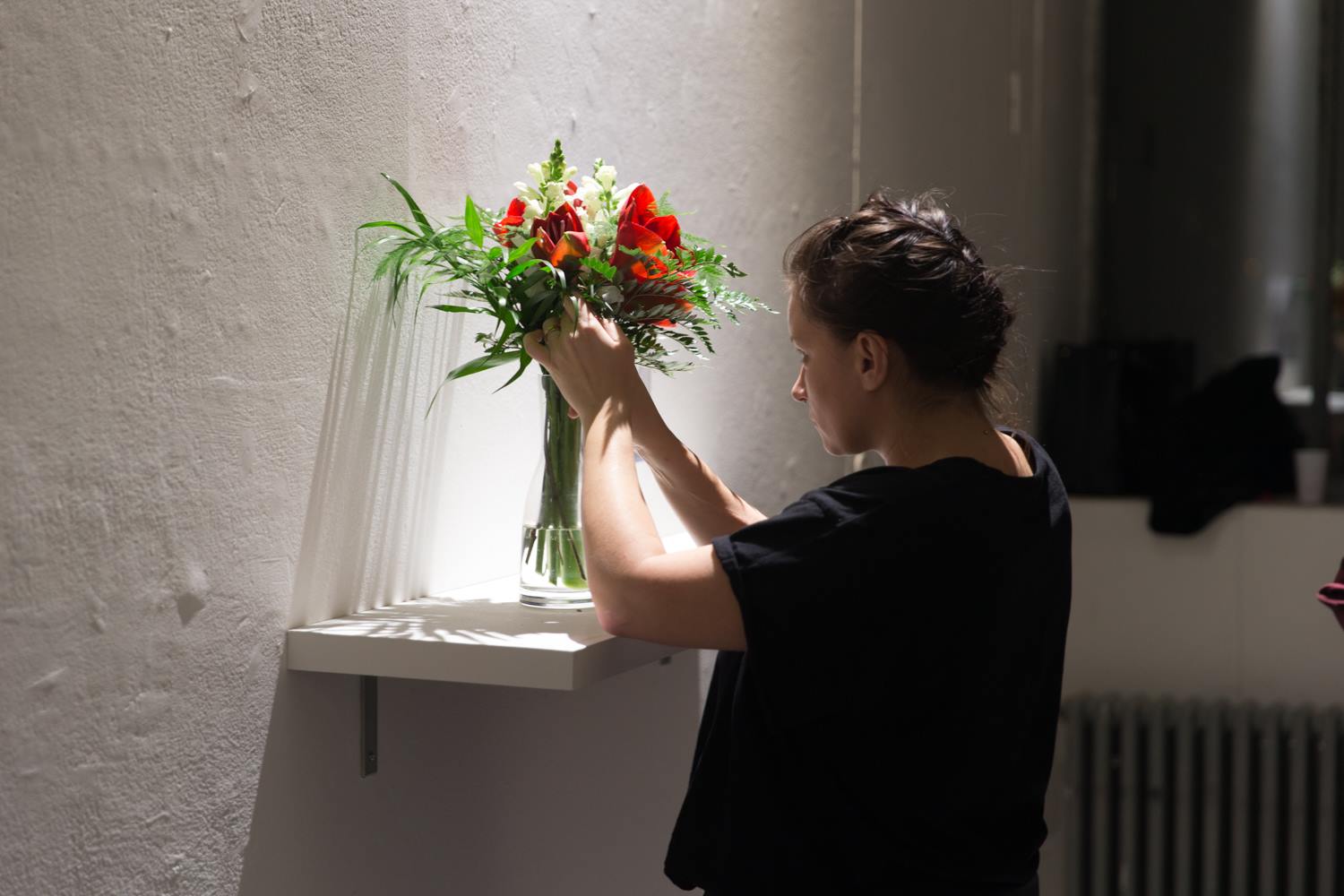 Exhibition opening: An original performance The security force: are we secure that our work offers something to the working class? by Kata Mach in conversation with the work by Cassie Thornton