After I had opened Desperate Holdings Real Estate & LandMind Spa at Dream Farm Commons Gallery in spring of 2019, Natalia Mount, Director of ProArts Gallery & Commons invited me to find a way to perform this “real estate agency from the future, when there is no more land to buy or sell” in Oscar Grant Plaza in Oakland. The Desperate Holdings project came out of 4 years of tending some clay that I had taken from a deep hole in the San Francisco financial district, when they were digging the foundation for what would be the Salesforce Tower in 2015. 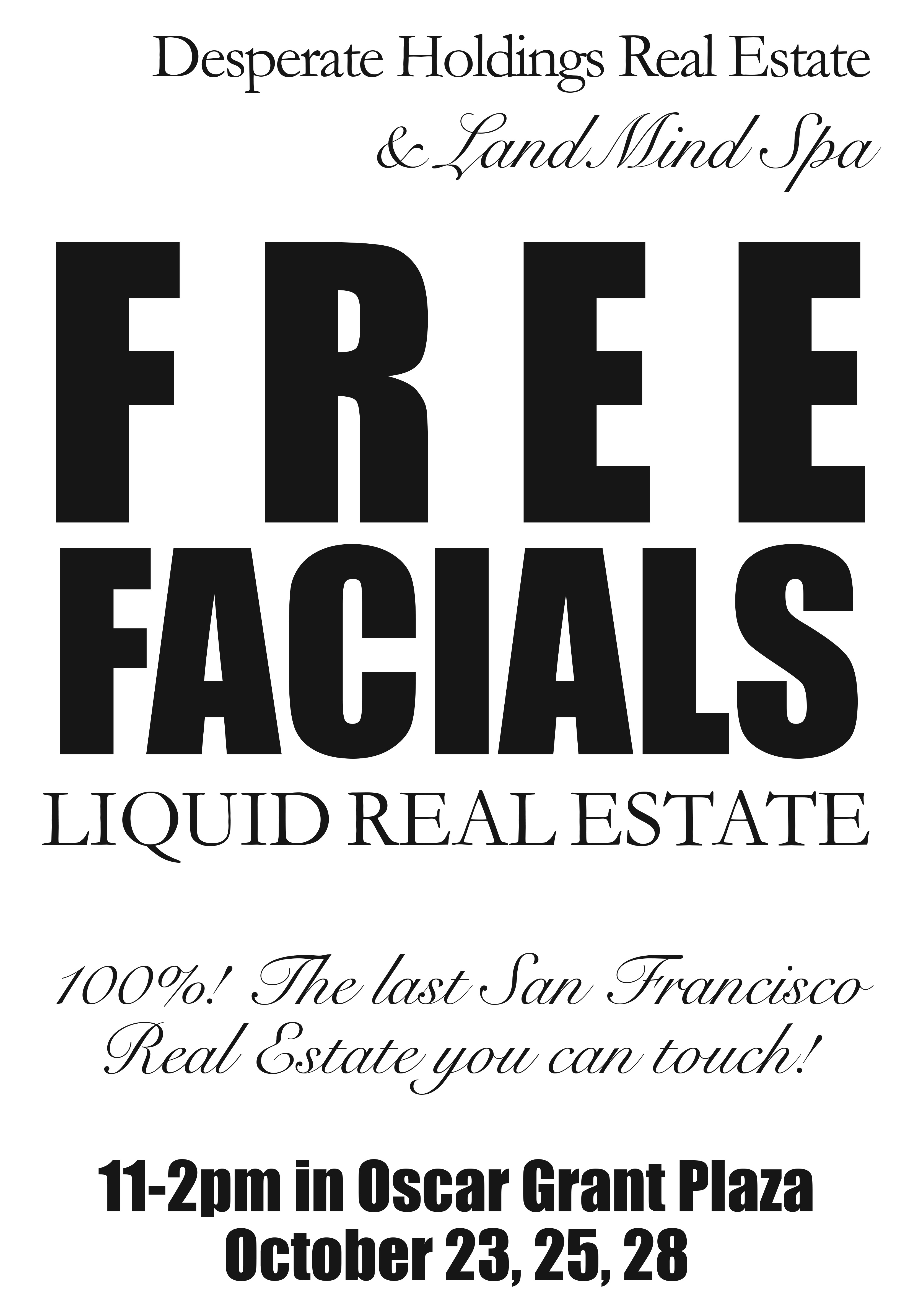 Listen to this poem about the clay by Yasmin Golan called

CLAY IS + HOLDS
The text of the poem is also included in a small pamphlet published by Tripwire Journal, which tells the story of this clay and many of the things me and some friends/collaborators have done to try to understand why it is so strangely powerful even though it has no economic value. 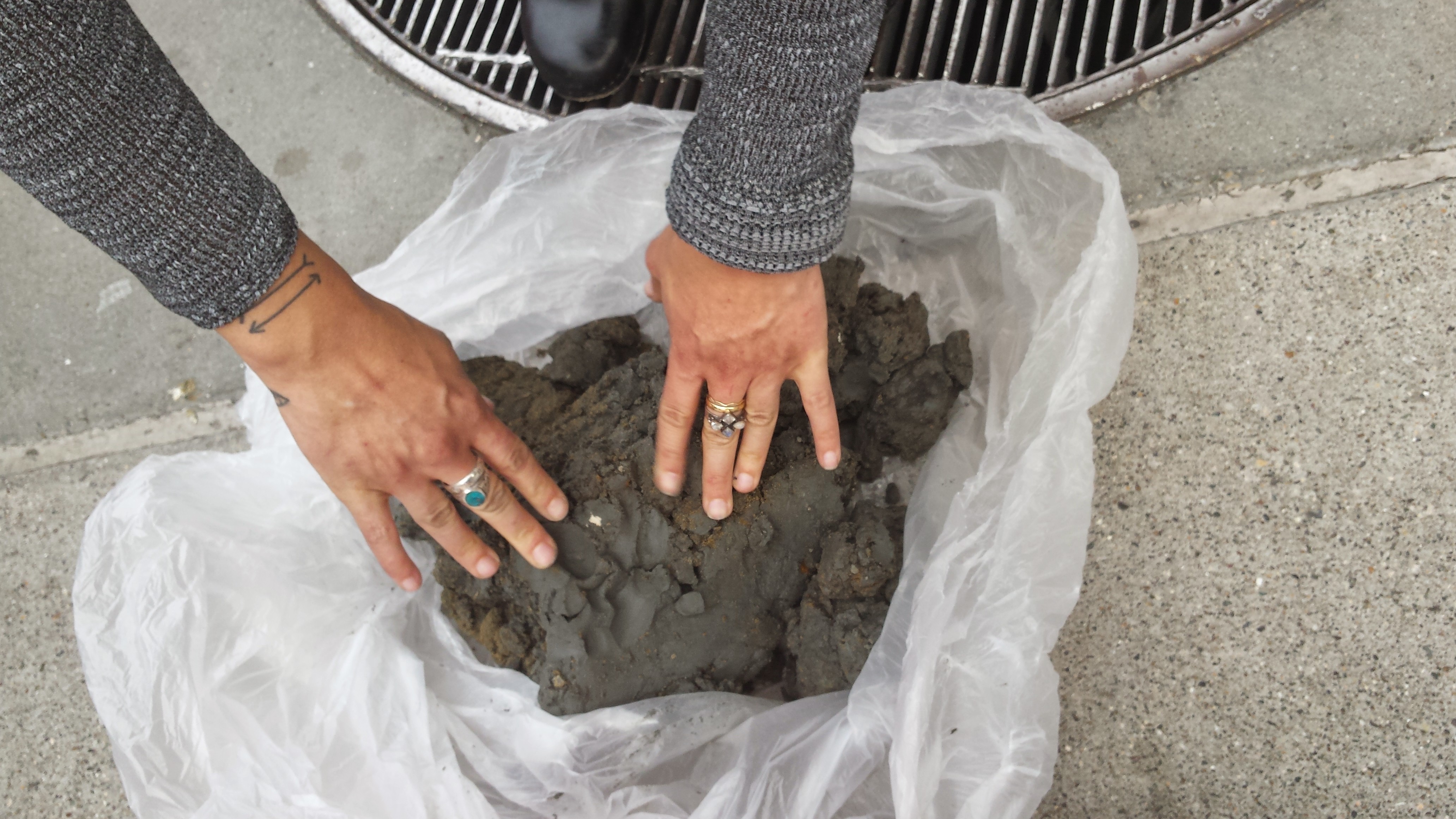 I made a proposal to ProArts to post up a real estate tent at Oscar Grant Plaza during working hours where I would offer “Luxury Real Estate Facials”. I wanted to offer this service as an excuse to talk to people about the absurdity of using the real estate market as the only determinant for who can live and and belong somewhere, as we touch land and think about our relationship to it. 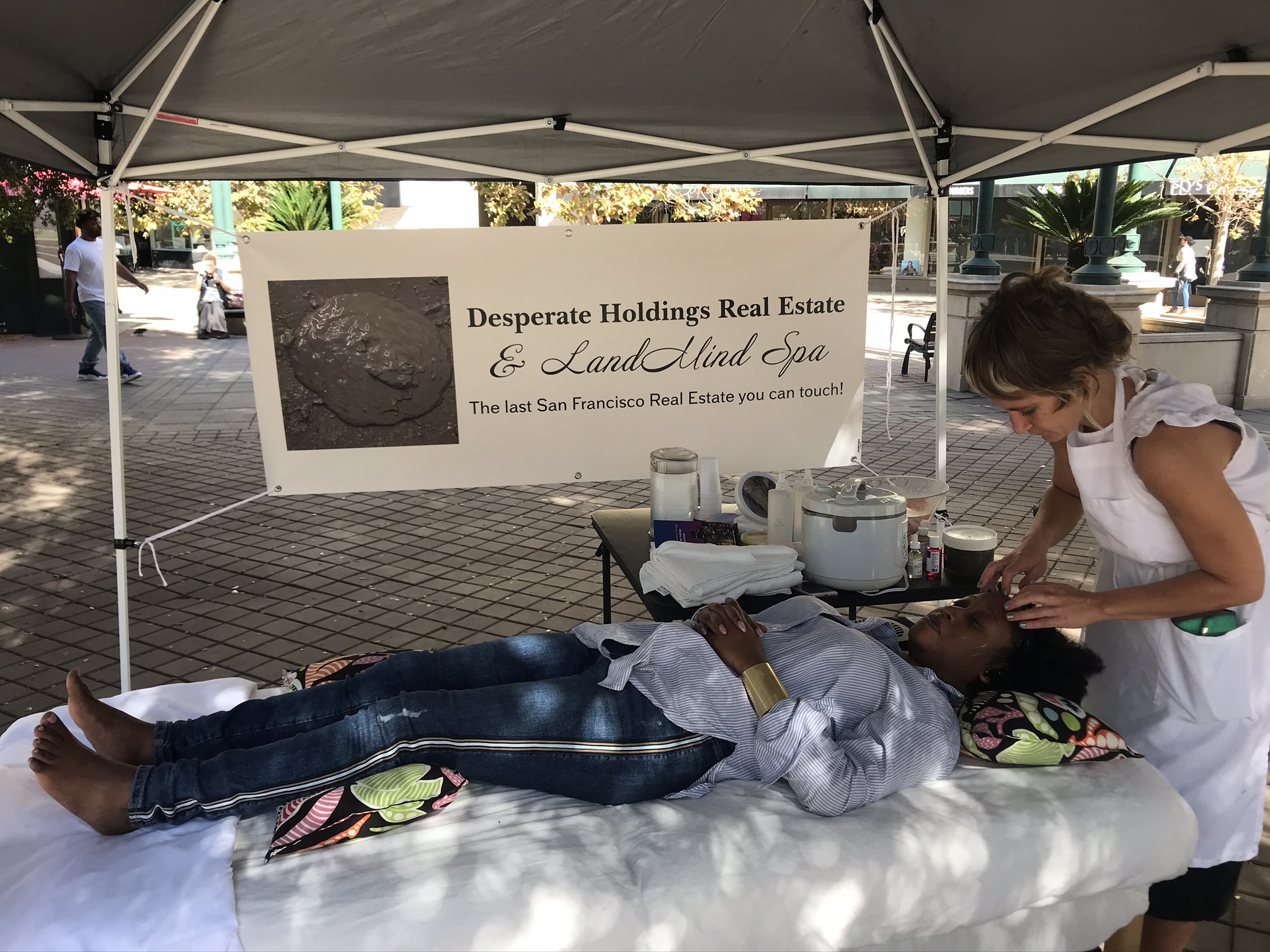 So I used the clay to give facials, and while the clay dried, I would read to people from this pamphlet. Many people fell asleep on the massage table while I read to them, even when the plaza was buzzing with activity all around them. I usually read them the first few pages of the book and if they slept, I pretended not to notice. I figured that if I kept reading, they would keep sleeping. Most people had never received a facial before, and despite having an amateur rub your face in the center of downtown Oakland, people relaxed so hard. 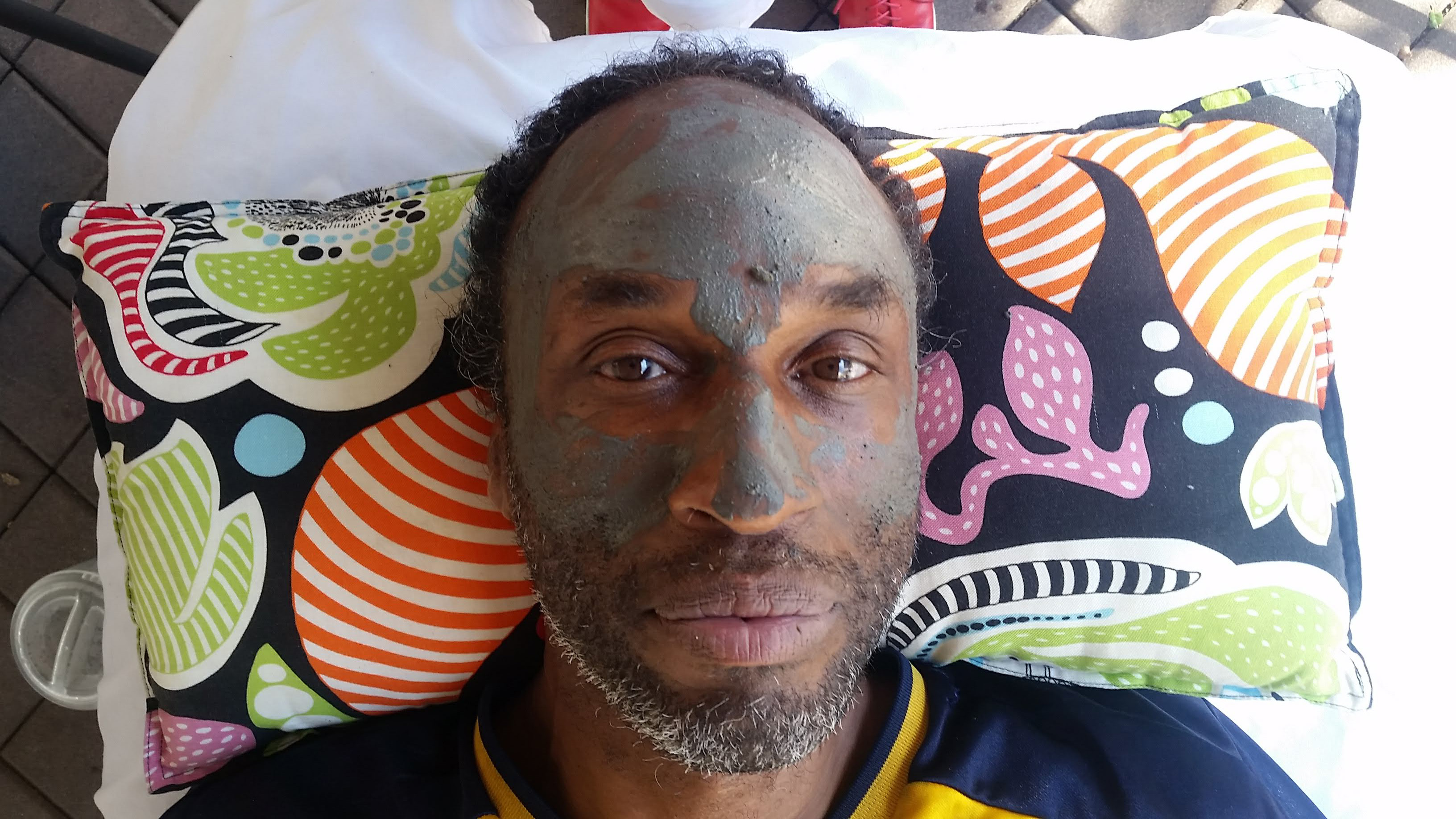 I sat under the tent from 11-3 on weekdays (with Natalia, Grace or Yasmin), offering free facials using the clay from under the Salesforce Tower. I didn’t expect anyone to come. I contacted many real estate agents to offer them facials, and I posted advertisements online wherever people might be searching for housing– listservs, facebook groups, etc. I made loads of online appointments, which most people canceled due to the fires north of the city that made it hard to breathe. I brought protective face masks to give away, but during the lunch break or the smoke break or the coffee break when I met most people, they did not want to disturb their faces with a mask. But people did want facials. I had never done a facial before, but Sarah Rowe had taught me how to wash someone’s face in a Land on the Face Luxury Spa Group event at Dream Farm Commons this spring. Sarah had come all the way from Omaha for the opening weekend of Desperate Holdings, where she blessed the hell out of all of us AND washed our faces. To brush up on facial my skills, Natalia Mount and I watched a lot of homemade spa videos on youtube. 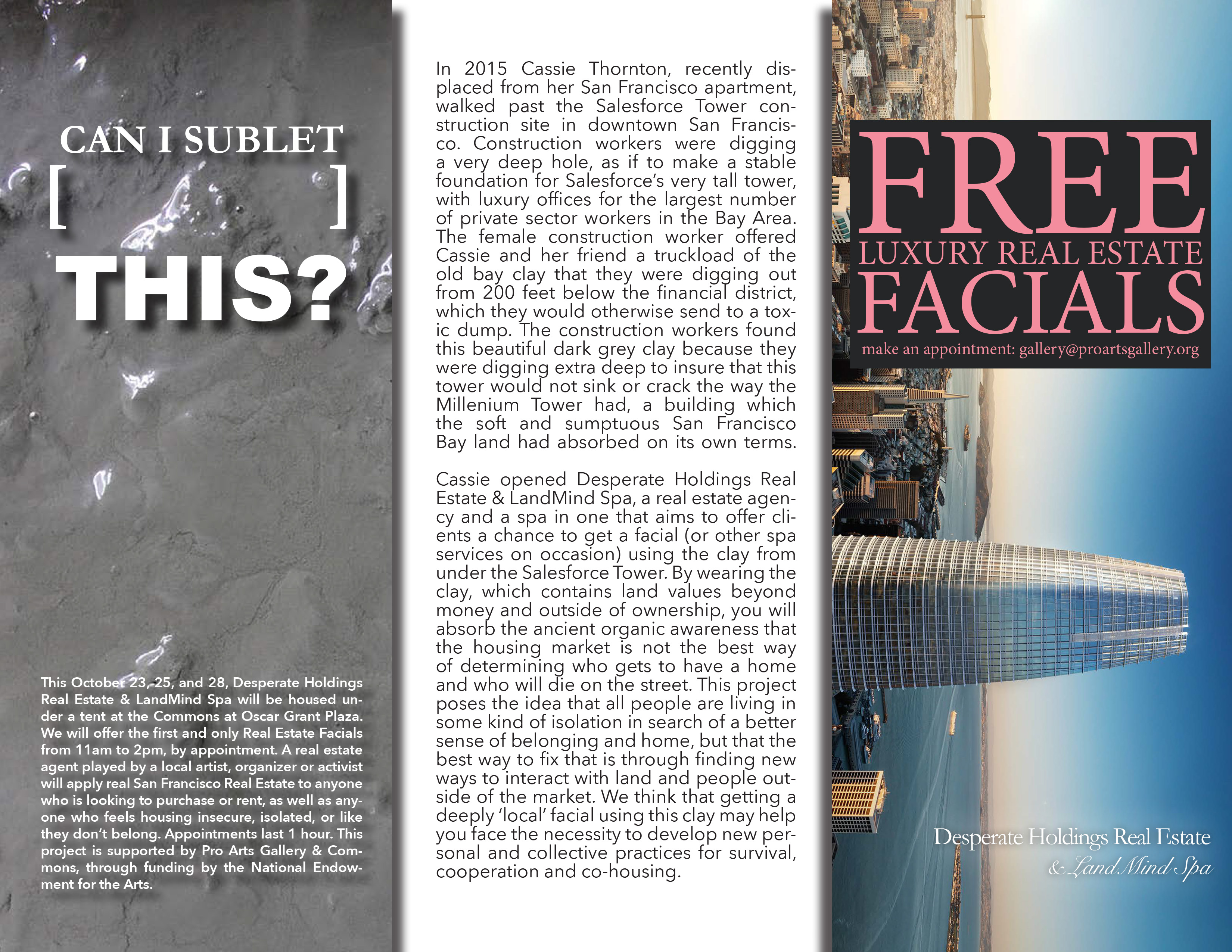 As I slathered the clay on people’s faces, they went soft. I asked them about their housing, sense of home and belonging in the Bay Area and they talked. I never remembered to give people the waiver to sign (to keep people from suing me) because there was so much trust and camaraderie. We talked about the clay, and how it is from an area next to one of the oldest known sacred burial sites on this land mass. We talked about a life that seems to take place on always unseen land, or a life that is lived on an economic landscape that makes it really hard to have the capacity to remember that real estate is land. We talked about land as being made of decomposed bodies. We talked about burial. We talked about dying to become one another’s soil. We watched youtube videos during some facials, of uprisings in Haiti, Libya, Chile, and some people could show me their relatives in the videos. Some of those people said they don’t feel safer in the Bay Area than they did in the place they had escaped. Some people never put their phone down for their facial and some people were city employees who came to check my Real Estate Broker credentials. Some people showed up who had dug the foundation for the Salesforce Tower, and some of those people had found many skeletons in there. Some people seemed more like specters. Some people wanted me to use the clay to remove the weird junk under their eyes that made them look old ever since they turned 70. Some people who came had jobs at Salesforce, and they cried because that is a pretty difficult place to work if you are not a white guy. Someone who got a facial was possibly the first black woman who had worked as an Oakland city plumber, with the softest 85 year old skin. Some people had eczema and we used the clay, rosewater and a lot of shea butter and hoped it would help. Some people were coming because they were waiting for a free food table to open that never appeared. Some people were radical clowns and they came to tell me about a workshop they teach called somatic slapstick. People with and without homes and money admitted living with so much anxiety, isolation and overwork that they felt unsafe and a lack of belonging. I did not yet give a facial to Mr. Marc Benioff. But I will.