From 2012 to the present the FED has provided alternative credit reports for people who have a bad credit score and are in need of housing or a job. This intervention in the dehumanizing credit industry challenges the dominance of the numerical and algorithmic credit reporting systems (FICO scores) that sort and constrain people’s lives and make them feel like special little failures. These narrative credit reports, typically one page long, are based on in-depth interviews about the story behind a person’s conventional credit report and resume. By simply asking what the story was behind why the bills went unpaid, the interview process reveals that most people are attempting to be trustworthy in a predatory financial landscape rich in landmines of fines and tricks. So, instead of relying on a credit score to represent a person’s trustworthiness and value, the Give Me Cred form acts as an auxiliary document to be handed in to an employer or landlord, and it looks and feels like an official form–> except that it reveals the real and often heroic human story behind a person’s financial history.

Here you can see her office, under a giant table.

Since the 1950s, funded by the FBI, credit reports and numeric scores have been collected and calculated to rate and regulate people’s access to credit. Since the 1990s, the system, which was and still is developed by private corporations, not the government, has been standardized and computerized using secretive system that no one person or government entity can see or regulate. Yet today, banks, credit card companies, potential employers and landlords look at these documents to determine the ability for an individual to access loans, housing, or jobs. This crooked document is even taken into account by judges and parole officers. The credit report has become a powerful disciplinary tool, and a deeply unfair and unaccountable one. 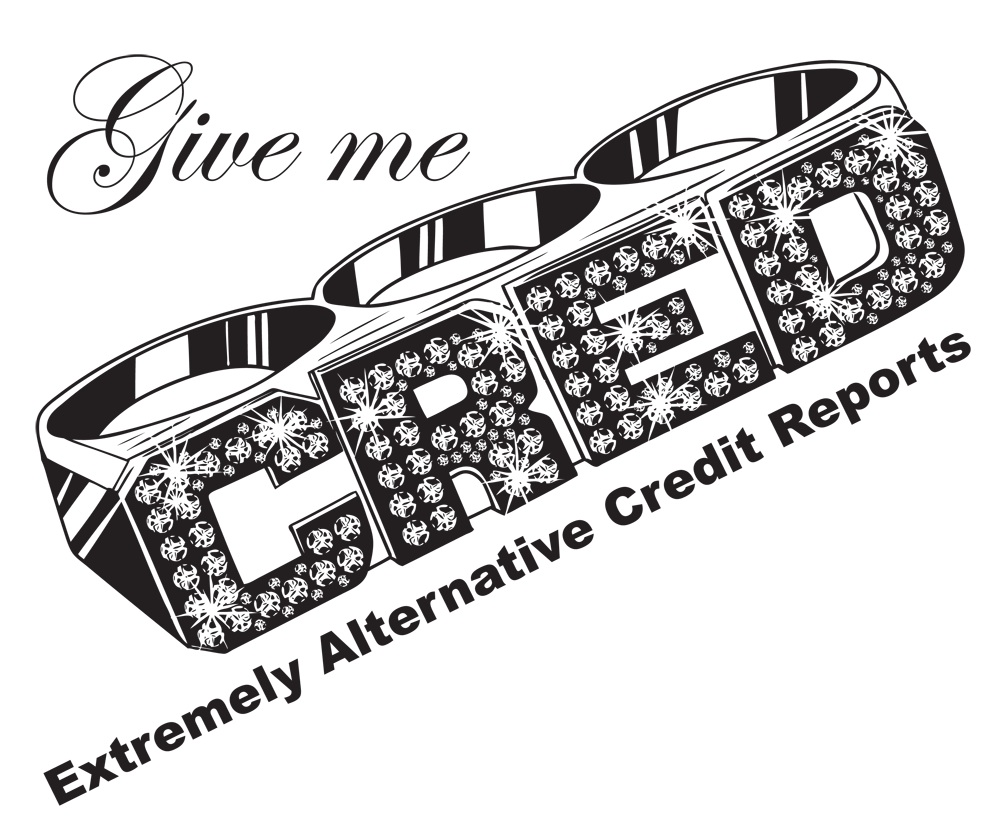 Thornton’s alternative credit reporting initiative “Give Me Cred” had its roots in her work with the activist group Strike Debt in the Bay Area. This model strategy was intended to free up debt resisters– so that when debtors decided collectively not to pay back illegitimate or predatory debts (see the Corinthian 15 and the Debt Collective), they would not ruin their credit score and therefore forfeit their future access to housing, jobs and loans. With Strike Debt she studied and offered workshops on the origins of the credit reporting industry as well as the current credit rating technologies’ enforcement of racial segregation and general financial obedience. In 2014, during a residency at the SPACES Gallery in Cleveland, she began developing a method for offering strangers (solicited through Craigslist) a chance to explain and narrativize their “bad credit” based on a personal loan. Thornton would write a credit report based on how the person dealt with the loan she gave them. 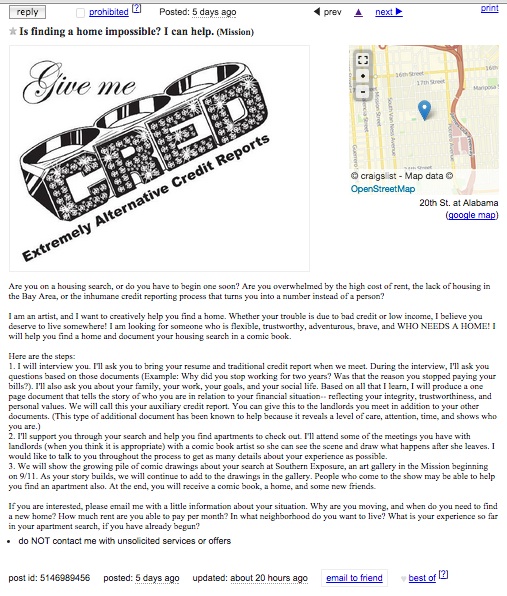 In 2015, as part of Southern Exposure Gallery’s “Makeover” show in San Francisco, Thornton created an oversized table under which she conducted and collected alternative credit reports from a wide diversity of “bad debtors,” including artists, students, parents and parolees. The reports allowed participants to explain the ways their bad credit was the result of factors beyond their control: medical debts incurred by an illness, the loss of a home, the birth of a child or predatory loans of all kinds. The vast majority of participants reported that the alternative credit reports Thornton prepared helped them find jobs or apartments, in no small part because of the therapeutic value of telling their righteous story of survival to an interested and supportive listener who could see them as well as the political and social conditions that put them in this position in the first place. Most people feel as though their story is erased by the purely numeric scores of conventional credit reports and so they too erase it. The credit reporting interview looks like a meeting, but it is at least 50% magic.

This project has been integral to Thornton’s practice of stripping financial debt, which has become among the most powerful social and economic forces today, of its legitimacy by questioning its basic foundations and institutions. Thornton continues to use alternative credit reports, especially in cooperation with social movements struggling against debt.