This October 23, as part of an annual ritual at the Cockpit Theatre in London, The Feminist Economics Department (the FED) offered an Initial Coin Offering for a mythical feminist currency. In this ritual about 25 men from the audience went through a labour ceremony, during which they were cajoled with caring love and support by a group of women wearing balaclavas. This ritual was meant to act as a militant detoxification program, wherein the men could rid themselves of their patriarchy. After what felt like indefinite gestation, the men gave birth to the first mythical cryptocurrency.

Many thanks to Lita Wallis, Cecilia Wee, and Georgia Muenster for taking part in this completely fictional and playful performance. Photos by Jonathan Greet. 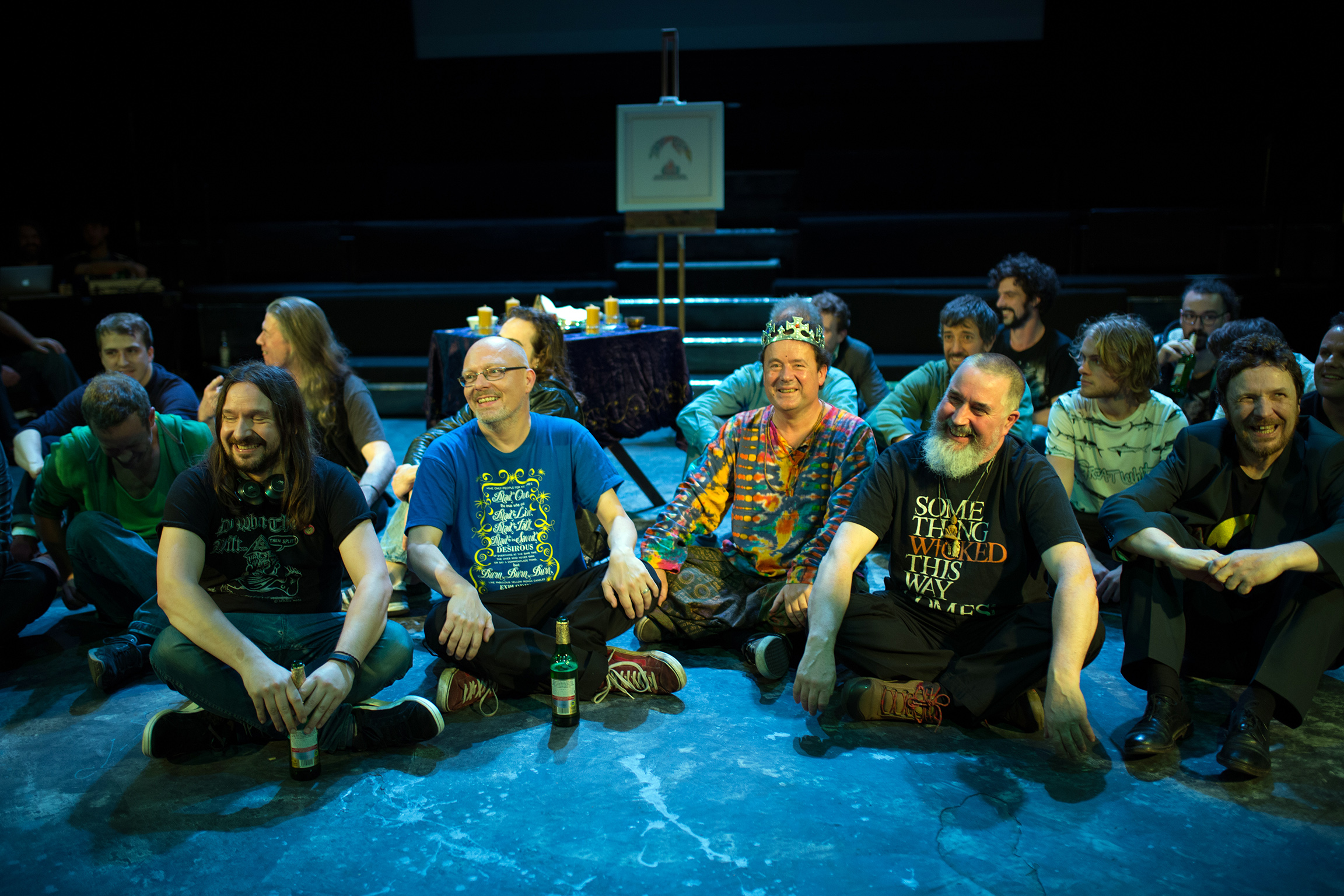 “Although halfway through I was regretting joining in, by the end I was glad I had.  Obviously, I wasn’t anywhere near experiencing child birth but lying there, struggling to breath in time with others, being watched by an audience and shouted at by some masked women, I did feel a bit vulnerable.” 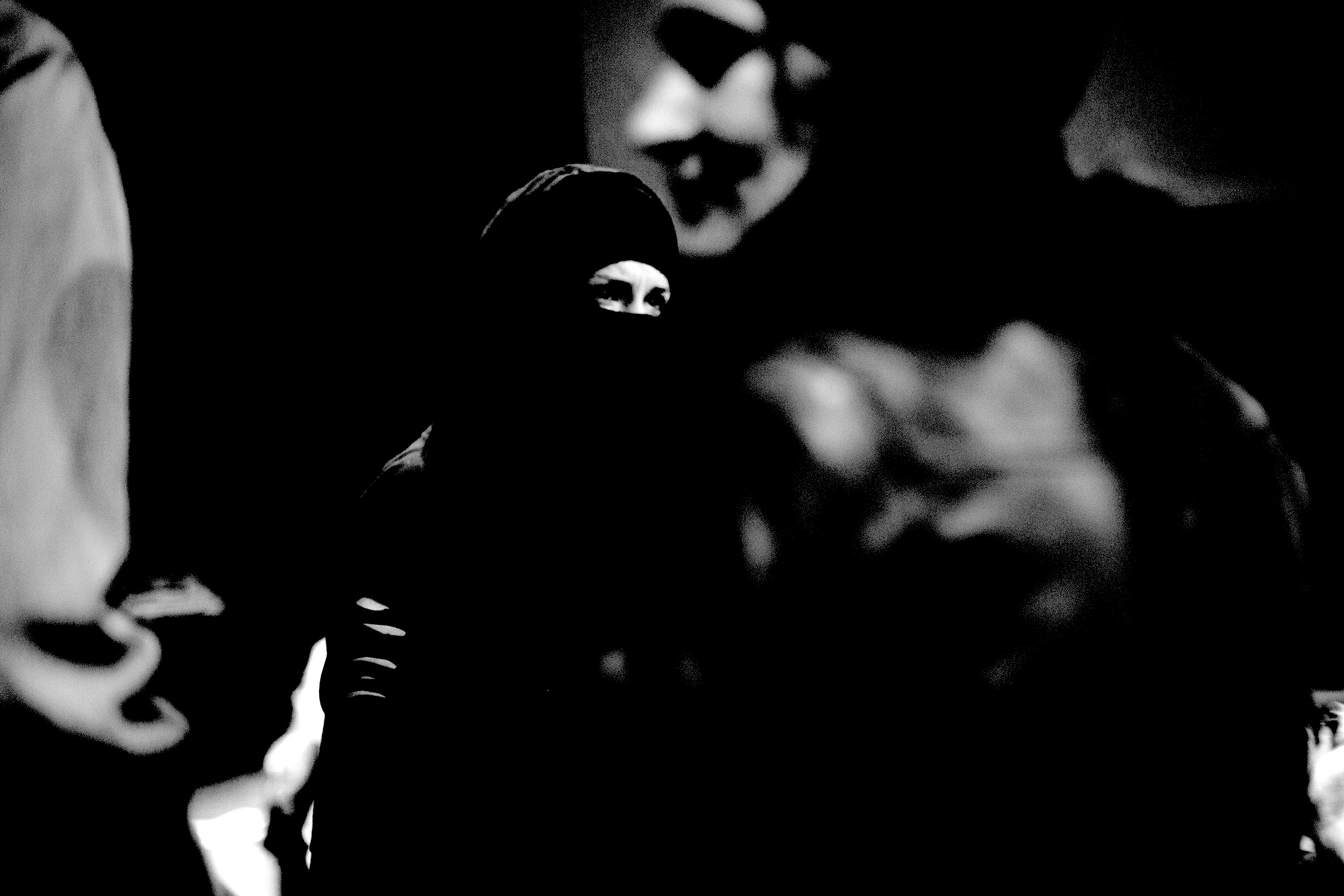 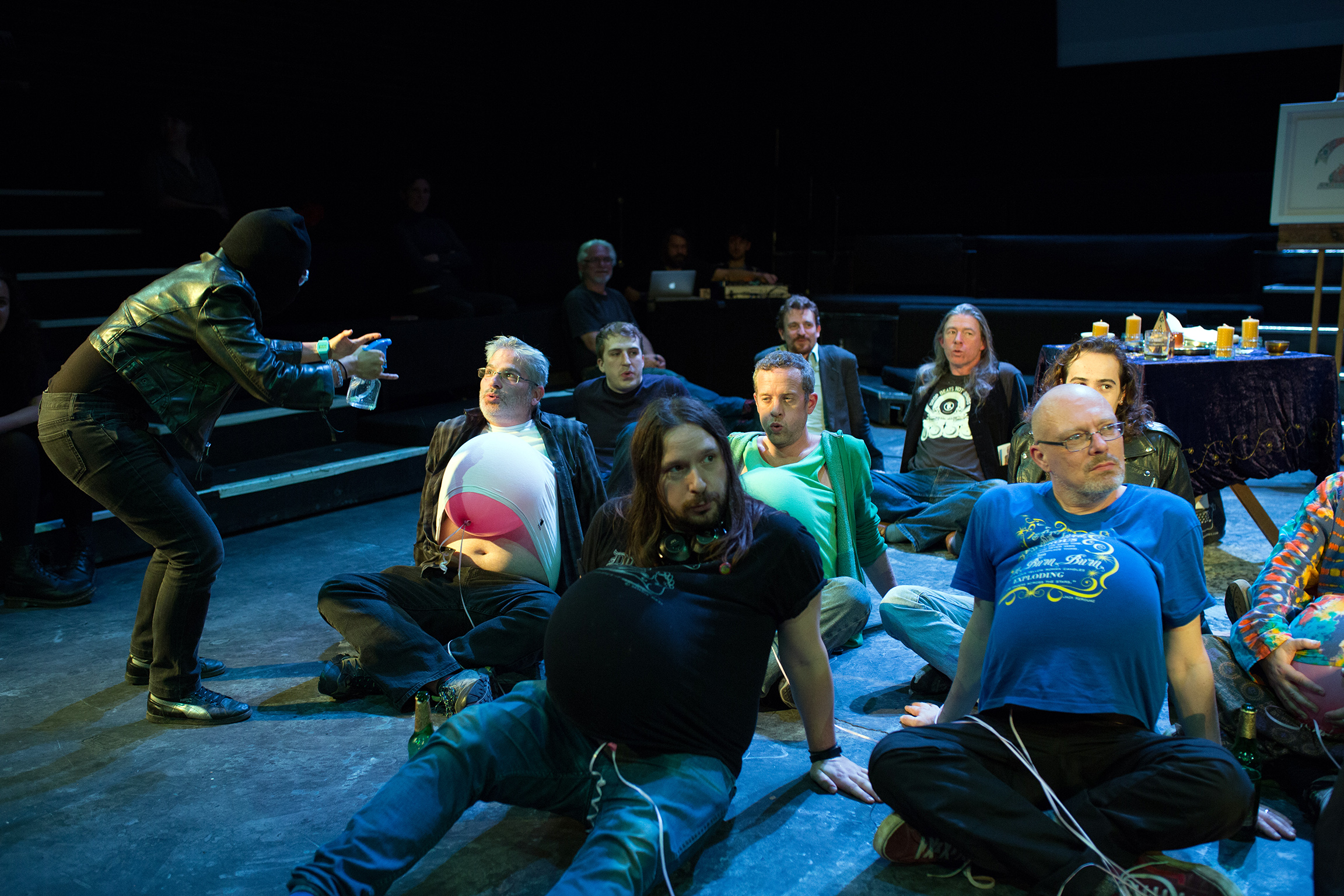 “It was certainly unexpected, not the audience participation that I went for. A week earlier and I wouldn’t have known what CIS was.  I had heard the term a few times and looked it up, to find that it wasn’t an acronym just an abbreviation. Anyway, now seeing myself as mostly CIS white male, I joined in.  I had wondered what the balloons were for, then I was stuffing one up my T-shirt.  Not as young and fit as I would like to be, I soon found the breathing difficult.  The people either side of me were not breathing in time with each other so I flipped from trying to breath in time with one then the other.  I started to feel a bit dizzy and slightly nauseous.  I was wishing I hadn’t joined in and wondering if I should cop out and go back to my seat.  So I was relieved when we were told to lie down and close our eyes.  Afterwards someone said they didn’t like the balaclava wearing woman walking around shouting at us, I have to admit that bit had appealed to my sense of humour.  Anyway we needed someone to keep us breathing loudly and sort of in time.  When we where told to push out the balloons I opened my eyes and saw all the balloons rising to the ceiling except mine.  I was lying on the cord, soon released it and it joined the others.  When I got up to go back to my seat I still felt a bit dizzy and unsteady on my feet.  I was glad I had a seat in the front row and didn’t need to climb any steps.  I felt in an altered state and ready for a ritual.” 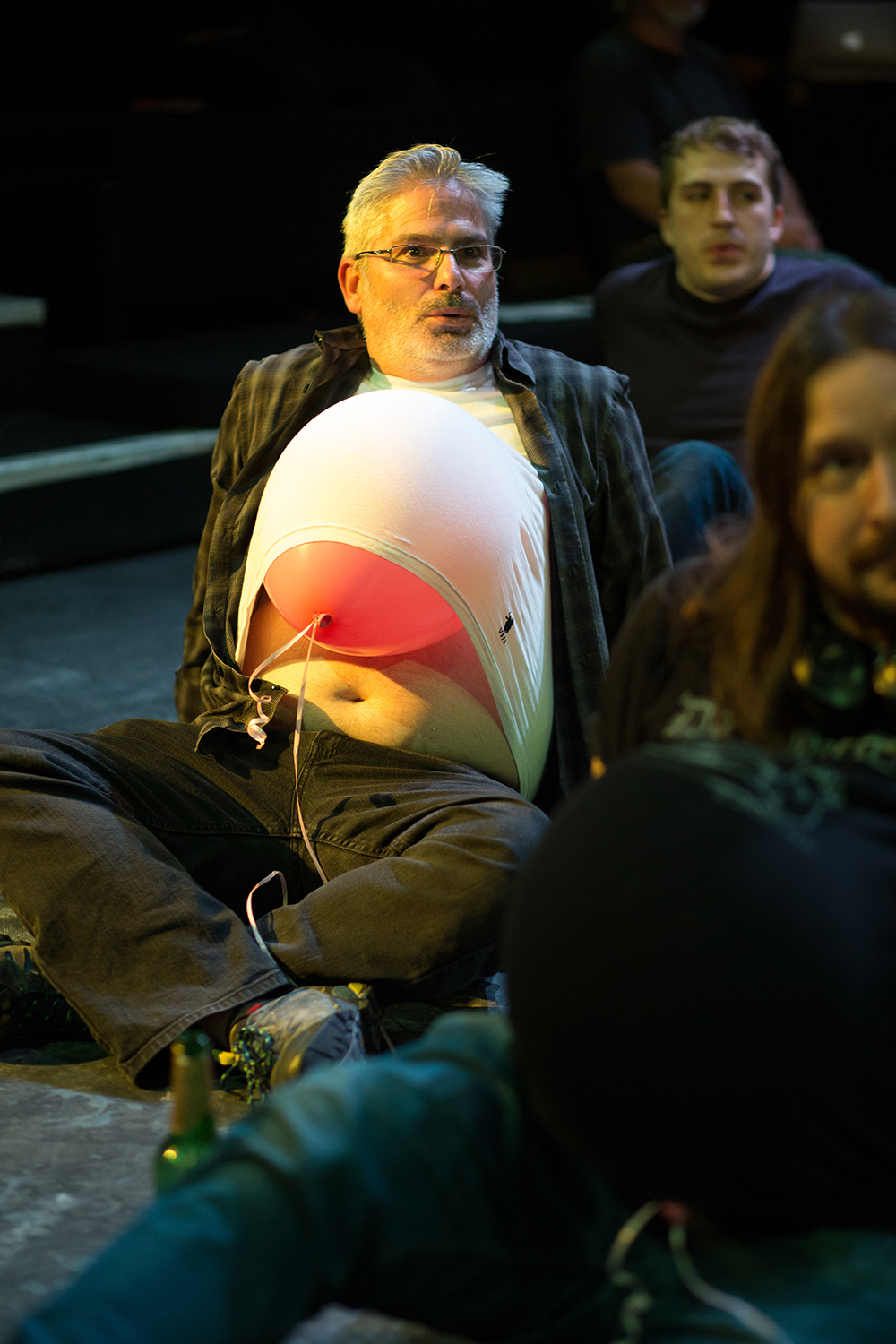 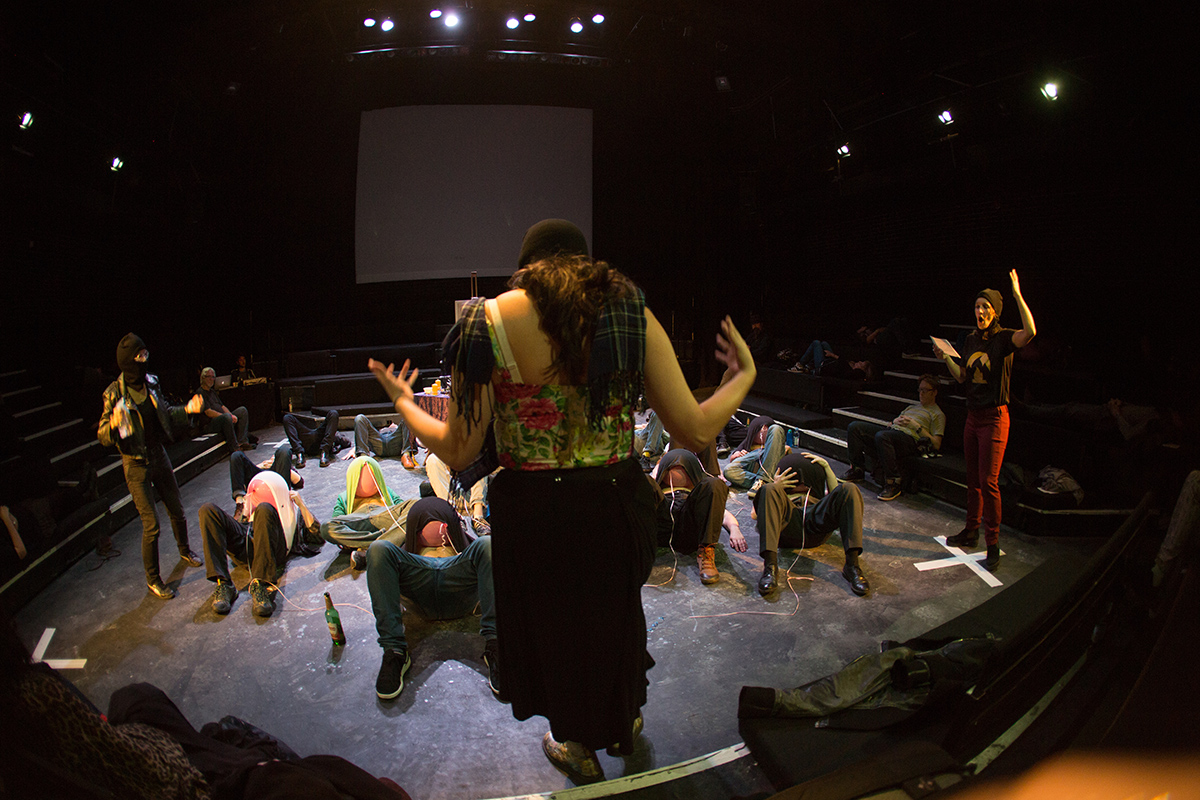 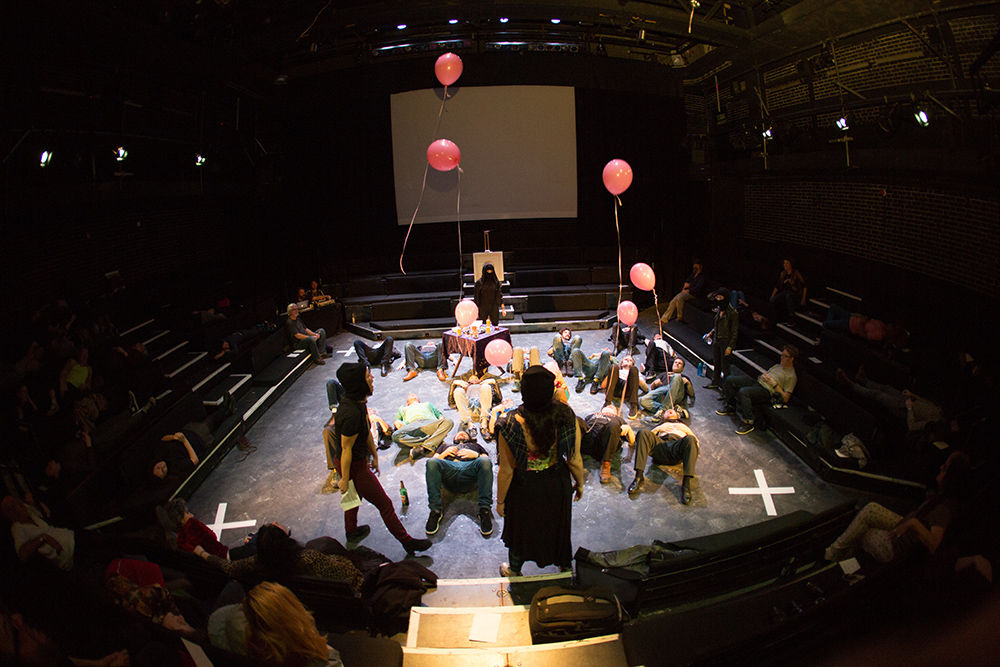 “During the ritual I felt the fabric of the money system burn away, leaving me tingling, giddy and slightly disorientated. Then I walked outside onto the street and felt the money system slowly reassert itself, weaving itself back into my being again, closing down the brief utopian reality and consigning it back to its ordinary place as a distant utopian imagination. Now I have to pretend to be in labour every weekend to briefly free myself from the System once again”