Mystery Hands is a multi-media installation and series of relational encounters created as part of the Precarity: Contingency in Artmaking and Academia exhibition at the University of Illinois at Chicago’s Gallery 400 in June and July of 2016, curated by Lorelei Stewart. This project addresses the catastrophic effects of the debt of the Chicago Public School (CPS) system, which has led to the closure of schools, the underfunding of education, attacks on workers’ rights and increased class sizes. Thornton’s used her signature technique of collecting hypnotic debt-visualizations from adults associated with or impacted by the crisis (teachers, activists, bankers, parents, principals), but sought to make these visions accessible to children, and asked children to help imagine ways to literally break out of the crisis that has so immobilized and sucked dry  the adult imagination. 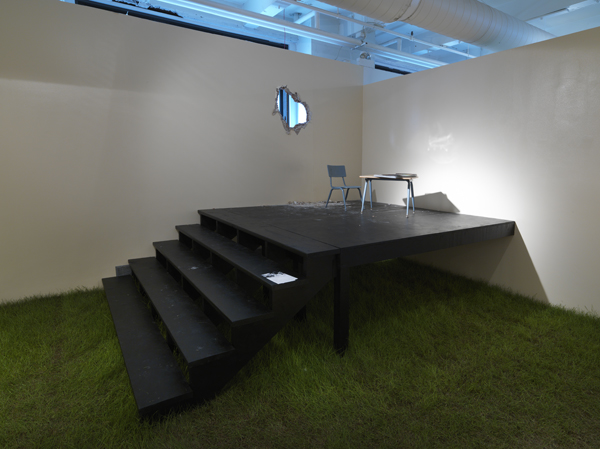 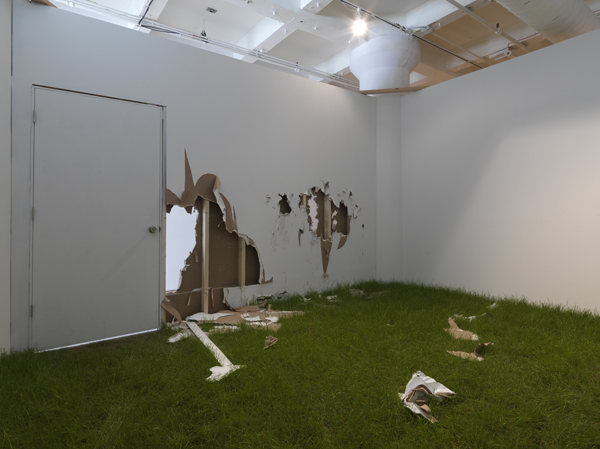 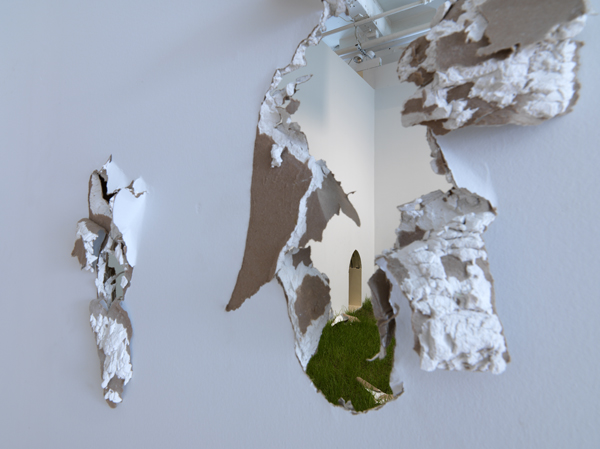 Upon arriving at the corner of the gallery where the work takes place, a visitor is met with a curious scene: a large alcove, with blank white walls on three sides, full of living grass. Against one wall, an austere black deck hovers on top of which sits a child’s chair and desk illuminated by a jagged hole in the gallery wall, as if something has punched through from the outside. The space is filled with the sounds of interviews and visualizations that artist conducted with various adults impacted by the CPS debt. These also provided the raw material for an XX-page children’s story-book titled Mystery Hands which sits atop the desk on the deck, prepared in collaboration with children who reenacted the vision of a CPS teacher involving debt manifesting as a malevolent leprechan hiding golden coins in plain sight while causing chaos.

The children’s book, which Thornton and the CPS teacher read aloud to groups of children at regular intervals throughout the exhibition, concluded with an invitation for children to go underneath the deck and find a secret door to a room just for them, where they could break out of the claustrophobic paradigm of debt.

Indeed such a door and room existed in the gallery, and within it a crowbar with which the children destroyed the wall that separated the room from the rest of the gallery throughout the course of the exhibition. Children set the rules for this room and adults were made to abide them, including the rule that money was to be placed in a red purse hanging from the outside door handle. 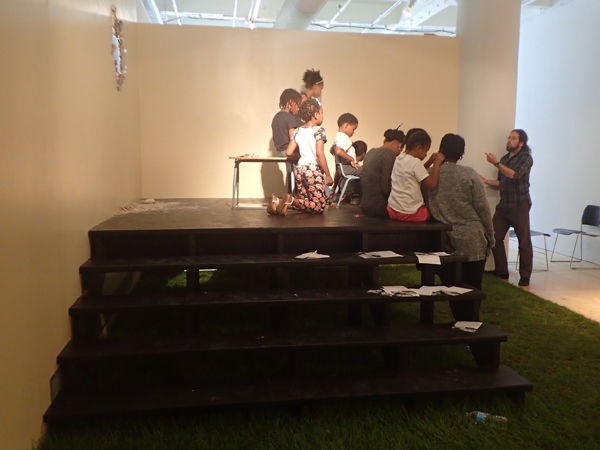 In addition to the regular readings, Thornton also worked with activists, parents and teachers she had done visualizations with to organize a series of workshops for kids and teens in the gallery. She also worked with kids to create an audio-tour to the pieces in the broader Precarity: Contingency in Artmaking and Academia exhibition.

The horrors unleashed on CPS by the debt crisis are the result not of spending too much money on kids or paying teachers too generously, but of years of neoliberalism and financialization. While kids have had no control over this, they pay the price. Meanwhile, all the adults, from politicians to parents to bankers to teachers, are lost as to what to do. This work is based on the hope that kids, many of whom have never known any reality but financial crisis, might be able to help release the adult imagination from the bonds of debt. 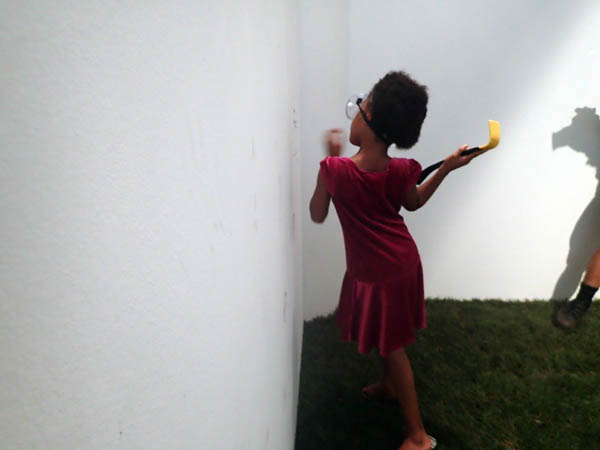