These workshops have been hosted in yoga studios, at alt economics thinktanks, and soon in galleries, crisis centers, and other spaces. These seminars range from 1 hour to 1 day long, and they focus on feminist economics, the practice– not the social science. When performing in an academic or cultural space, we rethink the conventional corporate/academic-style formats for learning and convening, by twisting them into the form of a free experimental yoga retreat, led by a real California yoga teacher who is also a feminist economist. “Using the physical and linguistic structure of yoga, we will sit or lie on the floor as we challenge the rule of money, individualism, obedience, and patriarchy over our individual and collective bodies.”

Rich and poor participants alike will use a combination of group discussions, ritual, writing, movement, and Kundalini Yoga to push our physical, spiritual and intellectual selves beyond the limits of mere survivalism and narcissistic self-care, into the generative unknown of solidarity and interdependence. This powerful flow will squeeze your infinite employment potential until your authentic happy baby rises up from the bowels of the earth and cries mutiny– against the tacit agreement that your life be spent working to save the economy that sells you back your own golden nectar.

We will combine challenging yoga sets and breathwork with theoretical, activist and artistic approaches to healing what’s broken and developing trust and solidarity to support collective forward movement. This class aims to link personal transformation with our collective ability to build strategic political interventions based in radical patience, post-work self-worth, collective responsibility, and the cultivation of non-monetary values.

In this seminar, we will use this social science as a pragmatic and embodied framework for living and cooperating away from the value paradigm of neoliberal capitalism. No experience necessary. 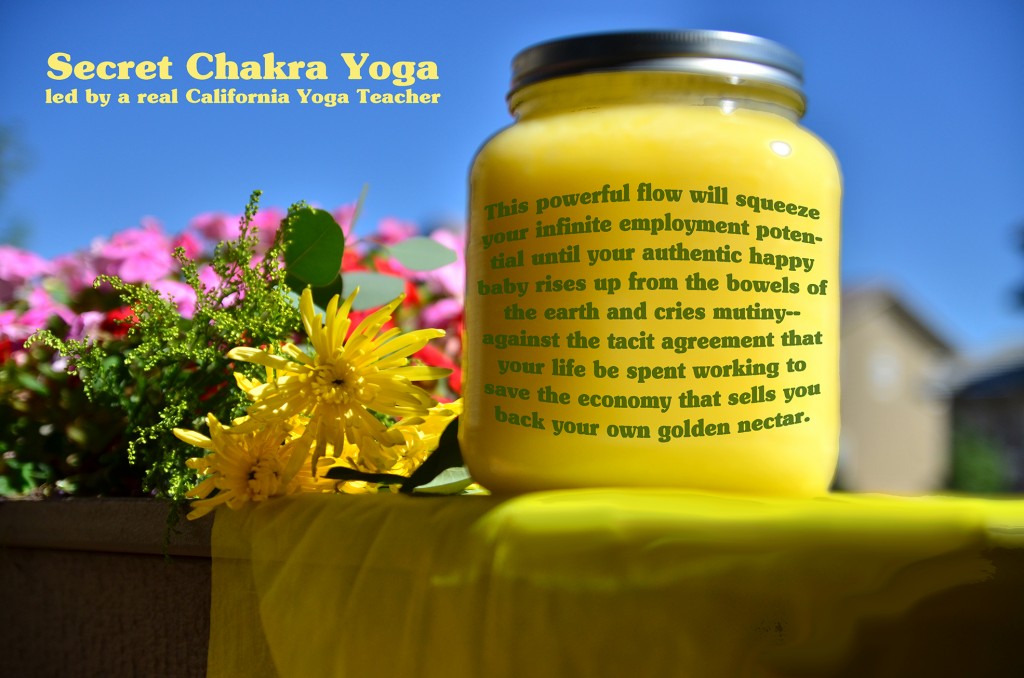 The first workshop took place in December 2016 in the back of a chocolate shop in Berlin, Germany called Casa Cacao. This 3 hour workshop used a combination of yoga, writing, movement, discussion and ritual so rich and poor participants could explore and transform their relationship to money. The session incorporated a challenging exercise series to stimulate the nervous system and move energy through the body. The workout was paired with unorthodox economic teachings that exercise cooperation, radical patience, post-work-self-worth, and other forms of value that escape money.

“Once upon a time, before value met money, [got married, and gave birth to scarcity, competition, guns and real estate] things were different. Humans, like every other species, had tails. The tail was no meaningless accessory or christmas decoration. It dragged, swung, and flopped out of control, acted as an antenna which tuned into the vital interdependent connections between all beings. This mystical prostheses, located just below the root chakra, has disappeared for humans, but not from the planet. Look at dogs! They wave their tails even though they don’t have a job.”

Unless we take a critical look at the difficult marriage of value and money that rules our lives, we will remain unhappy selfie monsters, separate from the rest of the life world. This workshop is the first step towards growing up and out of our faithful devotion to money. We will deal with loneliness, scarcity, depression and narcissism, by clearing the traces of an abusive economic system on our bodies. In subtle and hilarious ways we will pretend to be animals, until we remember that we are.